“God is in the details”. -St. Teresa of Avila

At the three way intersection of Vineland, Lankersheim and Camarillo, a five minute walk from my condo in North Hollywood, I noticed that a Chakra Balancing Studio has just opened one door down from the Halal Meat Store. Its neighbors to the south are the Odyssey Video Store (one of the few remaining video rental stores in Los Angeles) and the brand new Black Bottom Southern Café. To the north are Forever Young Pilates, the Fringe No Ho Hair Studio and the Idle Hour Bar and Restaurant which is situated in a two-story wine barrel, that was once home to La Cana, a flamenco bar operated for many years by a neighborhood legend, the reclusive dancer Dolores Fernandez, who lived on the second floor of the barrel.

Between the Halal Meat Store and the Chakra Balancing Studio is a building covered entirely by a weird and wonderful mural. If you look very closely you can find a hidden door painted to blend perfectly with the mural. (I’ve never seen anyone going in or coming out of the door so I’ve never had the opportunity to ask, “What’s going on in there?” I really want to know.

I’ve described the street in detail and provided photographs because I see God and hope for world peace in the details.

The Halal Meat Store is the Muslim equivalent of a kosher meat store, that is, the meat is slaughtered and prepared as prescribed by Muslim law. (I only recently became aware of this.)

I stand across the street and contemplate the unlikely perfection of this eclectic hodgepodge of businesses and I am convinced that God has had a hand in these details.

The great Irish writer John O’Donohue, said that “When you begin to think of God as an artist, everything changes.” He goes on to say, “A true artist never repeats himself.” There is something in the way this street has combined a lot shabby elements, not especially attractive in themselves (except for the Idle Hour) and become because of the splendid detail, an unrepeatably beautiful collage. And, at its center, existing peacefully among its neighbors is the blue and white Halal meat store.

“Well done, God,” I say pretty much every time I pass by.

I am well aware that God did not create the universe for my entertainment, and certainly not for my approval, nonetheless I am entertained and, in fact, delighted by this mysterious project called creation. I hope my delight pleases God.

The etymology of words fascinates me. Entertain comes from the Old French entretenir meaning hold together, support, from the Latin tenere: to hold. Its earliest meanings include, “to have a guest,” “to show hospitality to,” “to hold the attention of,” “to amuse.”

The greatest entertainers, Bette Midler, Tony Bennett, Chita Rivera, who I mentioned in a recent essay, have the ability, when they’re in the flow, to hold (tenere) the audience in such a rapt embrace that we are made to feel like special guests invited to spend time with them in the theatre or the concert hall, their homes away from home. This may be why James Corden, Stephen Colbert, Jimmy Kimmel etc. are called hosts.

There is a strong connection between entertaining and hospitality, the bedrock value of the Monotheistic Abrahamic religions—Judaism, Christianity and Islam. It was Abraham and Sarah’s hospitality to their three mysterious guests—God and two angels in some versions of the story—that led God to bless Abraham and Sarah with children, long after the past-due date.

Paul, in his Letter to the Hebrews 13:2 says: “Be not forgetful to entertain strangers: for thereby some have entertained angels unawares.”

God appreciates entertainment and delights in hospitality—or so goes my learned reading of the sacred texts.

Several years ago, my spiritual director, Wilkie Au, introduced me to the writings of the Jesuit scholar and theologian, Joseph Tetlow, S.J. who, after exhaustively studying the writings of St. Ignatius of Loyola, the founder of the Jesuits, came to the conclusion that a phrase that had been traditionally translated into English as “God’s Plan” is more accurately translated as “God’s Project.”  I was blown away when I read this; it called for a re-calibration of everything.

There is a finite inflexibility to a plan; once it’s set in motion it cannot be deviated from. There is something heavy, concrete about a plan. A plan is conceived from the beginning with an intended, optimum outcome in mind. In a sense the completion of a plan is foreordained. Plans do not invite improvisation, collaboration, spontaneity, and certainly not play.

It is difficult to imagine that God the Artist would allow Himself to be handcuffed to a plan.

The make-up of Lankersheim Boulevard was clearly not planned. It has evolved and changed like a living thing.

A project is envisioned, more like a garden, a living, breathing ever evolving organism which invites revision, improvisation and collaboration. When you’re building a skyscraper, you can’t assign your children to the southwest corner of the lot and tell them to use their imaginations and see what they come up with. Too much is at stake. It’s difficult if not impossible to course correct a 100 story skyscraper when you’ve already finished the first 70 floors. If the kids mess up the garden, we can always re-plant.

In my experience, God gives us lots of opportunities to course correct and replant.

There are few things that could entice me to revisit Las Vegas—I was there as a child and young adult when men dressed in suits and women wore gowns for the dinner shows where you could see Sammy Davis, Jr. Peggy Lee, Elvis, and if you were really lucky, Frank Sinatra, himself. Afterwards, for the price of a drink, you could sit in one of the intimate lounges and be royally entertained by Della Reese (decades before she was an angel) or Louis Prima and Keely Smith. In those days there was nothing behind the Desert Inn except the desert.

The one thing in Las Vegas that continually appeals to me—Cirque d’ Soleil shows aside—is the elegant Bellagio Hotel. The lobby of the Bellagio is a living, breathing project and it entrances the child in me. The stunning Dale Chihuly glass sculptures interact with the living beauty of the lobby garden which is recreated at least seasonally, maybe more often. The mixture of the ever-transforming garden and the glass sculptures which are rearranged to complement each season make the hotel, at least the lobby, a living, breathing thing—in contrast to the icy sterility of some Vegas venues and the stale-popcorn smelling cheesiness of others. 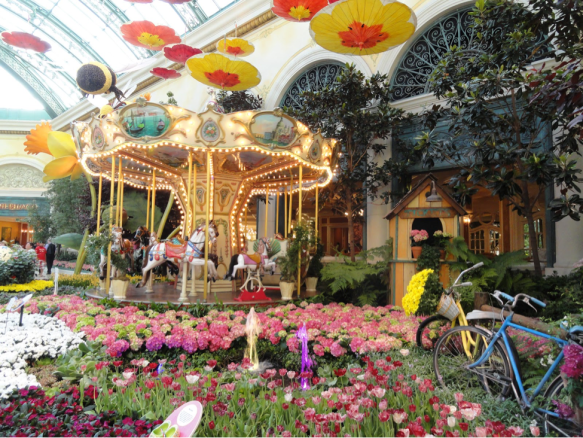 What Las Vegas and Vineland Avenue have in common is that they weren’t carefully thought out like Washington Square in New York City, the Place de Vosges in Paris, or French architect Pierre Charles L’Enfant’s genius design for our nation’s capital. 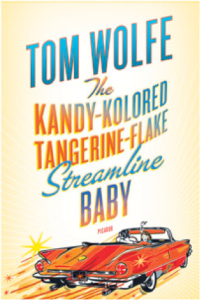 Writer Tom Wolfe created quite a stir upon the publication in 1965 of his first collection of essays, The Kandy-Kolored Tangerine-Flake Baby (a great book by the way) when he claimed that the back-lit plastic city of Las Vegas is “apart from Versailles the only architecturally uniform city in the Western world.” I don’t know why I remember things like that; I just do.

Wolfe’s remark is funny but I don’t agree with it. Vegas and Vineland Avenue have an ad-hoc, extemporaneous feel to them. It takes an incredible ability to suspend disbelief to imagine that either Las Vegas or Vineland Avenue was carefully thought out or “planned”. They grew wild, eclectically, complimentary and together.

Jesus said, and I paraphrase, “Don’t be too quick to separate the wheat from the chaff.”

My friends Peter and Greg, recently flew to the mid-west, Missouri, I think, to attend the funeral of one of Greg’s relatives. 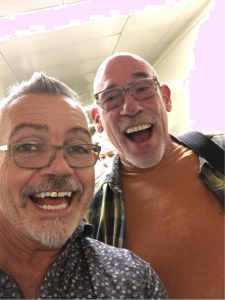 To know Peter and Greg is to love them. I pretty much defy you not to.

Peter, in a post-funeral conversation with one of Greg’s relatives, was asked what it was like to live in Los Angeles. As Peter described the rich, varied and surprising qualities of living in Los Angeles, the woman looked at him and said, seriously, I don’t think I could live with so much difference.

I, on the other hand, know I cannot live without difference and the daily embrace of it.

If I’d never ventured out into the world I would likely not know the meaning of halal, chakra or Pilates. The thought of not knowing about all of these, to me, exotic things makes me sad.

My neighborhood entertains and delights me. In the variety of establishments I see along Vineland Ave., I see a bouquet of wild-flowers that, on the surface, would not seem to complement each other, but, in fact, do. I’m surprised and grateful to realize that my neighborhood is a microcosm of peace and sanity.

I reflect on the micro of my neighborhood, Halal and Chakra, Pilates and the Idle Hour, and it gives me hope for the macro—the madness of Washington, D. C., the president, the media and the world.

In researching this essay I discovered that The Idle Hour was recently proclaimed a “Los Angeles Historic-Cultural monument.”

I’m including the websites for the Idle Hour and the Black Bottom Café.

The Idle Hour site is worth checking out for the pictures and history of the place.

Read the menu for the Black Bottom Café. One of their sides is Southern Popcorn: Tempura-fried okra with Mississippi Comeback Sauce. I never thought there existed anywhere on earth something that could tempt me to ever again eat okra. And here, practically in my own back yard, miracle of miracles . . . 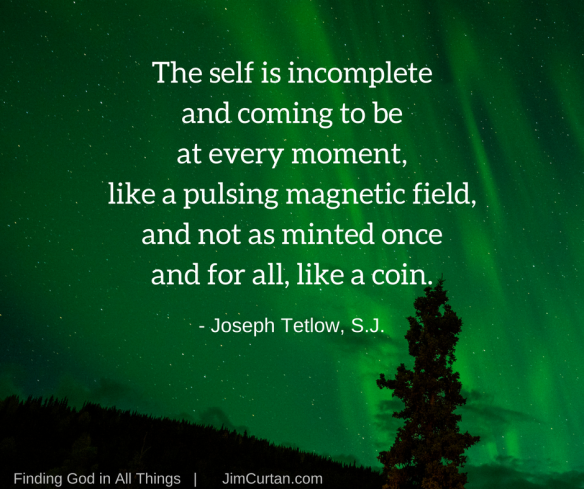 “The self is incomplete and coming to be at every moment, like a pulsing magnetic field, and not as minted once and for all, like a coin.”  – Joseph Tetlow, S. J.

2 thoughts on “God Is In The Details”